JUGGERNAUT PICTURES
We are a group of young adults who create brickfilms - stop-motion animation with LEGO bricks and similar building toys.

After the minor success of our film 'Lone Rangers' in the BricksInMotion.com 2011 contest, we decided to either shelf or end production on numerous projects. These projects that were cancelled were: 'The Florescent Light', 'The Elite Generals', the 'Who's the Best?' trilogy, and the 'Arc Troopers 255' series.

We started focusing mainly on our own original films, that didn't consist of film series. We started pre-production for the sequel to our highly successful film 'The Missing Piece' (TMP2) in August 2011. We also released 'Saltman: Burden of Hope' in the same month for the BRAWL contest on BricksInMotion.com. The film ended up as a shallow success, but it is, however, one of our most iconic films to date.

Toward the end of the year, we focused heavily on getting TMP2 done. We began production in mid-December, with a brief halt to create our film '-0' for the THAC competition on BricksInMotion.com. After New Year's, we began to invest heavy time into the film. Here's one of the behind-the-scenes photos: 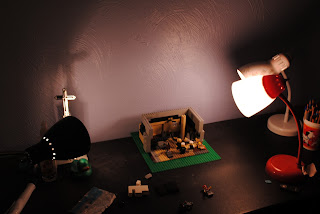 My brother and I were not satisfied with many of the scenes shot, which required us to re-shoot numerous many scenes numerous times. This resulted in the space on my laptop being heavily depleted, being that the film was being shot with my Nikon digital-SLR camera at 2k resolution. The reason for this is because we (Well, mainly I) wanted the film to be in full HD to provide the best watch possible.

Many scenes in the film required heavy effects-laden jobs, such as masking or explosions. This proved to be rather time consuming, and frustrated the heck out of me. Also, some shots required chroma-keying with CGI models being the background. I never got around to doing it; I will explain why below.

In the first two quarters of 2012, we released a few films ('Family Ties', 'Sour Taste' and 'Firework'), all of which were released in full HD. All of the films are short, under a minute to be specific. One interesting thing to note about Firework is that it is our first film at 24fps. While most people responded negatively toward its use, I personally think it's better animated than our 15fps films.

We decided to shelf TMP2 in the summer of 2012 when the completed scenes did not meet the image we were looking for. Therefore, we decided that we would re-shoot the entire film at a later, unknown date (We couldn't re-film that summer because it was a busy time).

Towards the end of 2012, my brother and I started working up ideas about possible new films to create, all of which were large ambitions. When we agreed on an idea in March of 2013, we started working on a script, that has yet to be completed. The project is a secret, and won't be revealed prior to its release with the only exception being possible film trailers.
Posted by JUGGERNAUT PICTURES at 11:14 AM No comments:

Before starting with the current day sets & animation, let me tell you about the first cut-

In the beginning of 2010, we started set building for the film. Due to the limited number of pieces we had (and still have), we created a multi-colored building for the prison exterior & interior. We felt that the set was good enough, so we started the animation. The animation we filmed wasn't too bad, but it wasn't in sync with the voice acting, so we stopped filming for a while. We then decided to make a second trailer after the already existing one. It became a minor success on YouTube, but when we joined Bricks in Motion, the truth was revealed that our film wasn't that well executed. We decided to delete all the film stock, and start from scratch. We then decided to put this film in the bonds, as we were striving for the funds to purchase more LEGO bricks & materials for sets. We also found ourselves returning the camera I received for my birthday, thus, leaving us camera-less. We, unfortunately, were not able to meet our original deadline, due to our lack of camera and sets. After Christmas, came New Year's, and after New Year's, our computer crashed. It was at that moment we realized that it would be very difficult to make this film-as well as remaking the original two films, entering TOY, and finishing The Flourescent Light, as well as The Missing Piece 2. We decided to once again postpone the film to a later date, until after TOY for BiM.

We decided to end production on the entire Arc Troopers series after our film "Lone Rangers" in mid-2011, as we had lost the scripts and found it too juvenile to work with. I still hope to make a Star Wars film with our customized characters, however.
Posted by JUGGERNAUT PICTURES at 2:37 PM No comments:

The pre-production phase of this film took some time to develop. The main reason for that being we wrote the script of the next ten installments in the film before continuing with this project. Not only that, there were also the first two installments that needed to be completed first, before the third one. Pre-production lasted from November 2008 - November 2010.

The script for this film was very simple, having a continued plot from the previous two films. My brother (second co-owner) & I wanted to have a continuing saga following up the first two films, & have the Arc Troopers in peril for most of the episode. The reason for this is, we wanted to show the protagonist's maturity in combat with little or no ability to any such great technology. Finally, after a long time figuring out the structure of the film, the script was written. My brother completed the script while I completed the script for the next episode (read the first paragraph to read why). Once the script was written, it was time for the voice casting & acting.

The audio in this film was reprized by mainly amateur actors. My brother, my friend Matt (third co-owner), & myself took the main leads. The rest of the voicing was done by a mixture of people, including a few YouTube collaborators (Ty360co, gerarddude5100 & Nanda Lego Motion Studios). Once all the voicing was in, it was then edited to their appropriate sound for the film. This was accomplished through the free sound editing software called Audacity. After all voice acting was finished, the sound effects were then needed. There was a large selection of sounds we needed (being that it is a STAR WARS film), assorting from lasers to R2-D2 type of sounds. FreeSounds.com was a large contributer to most of the effects, as well as human vocals for a "beeping" sort of sound.

Once all aspects of audio were completed, they were further edited into one project through Windows Movie Maker. Once we finished, we were ready to start set building & animation!
Posted by JUGGERNAUT PICTURES at 2:24 PM No comments: